A new, more modern look came in 1967, along with a new nickname: “Action Line”. It was with this revision of the C/K truck that General Motors began to add comfort and convenience items to a vehicle line that had previously been for work purposes alone. The majority of 10 series and some 20 series Chevrolet trucks from 1967 to 1972 were equipped with a coil spring trailing arm rear suspension, which greatly improved the ride over traditional leaf springs. However, the leaf spring rear suspension was still available on those trucks, and standard on 30 series trucks. GMC-branded trucks came standard with leaf springs in the rear, with the coil spring/trailing arm design optional. All 2-wheel drive trucks came with independent front suspension, while 4×4’s used a conventional solid axle with leaf springs. 1967 was the only year for the “small rear window” (RPO A10 offered a large rear window as a factory option.

The standard drivetrain was a three-speed manual transmission and one of two engines; the 250″ straight six or the 283 cu in (4.6 L) V8. Optional transmissions were several different four-speed manuals, the Powerglide 2-speed automatic, or the Turbo-Hydramatic 350 and 400 3-speed automatic.The 292 six and the 327″ V8 were optional engines. 10-series trucks came with a 6 x 5.5–inch bolt pattern, the 3/4 and 1 ton trucks came with an 8 x 6.5–inch bolt pattern.

The most visible change in differentiating a 1968 from a 1967 was the addition of side-marker reflectors on all fenders. Also, the small rear window cab was no longer available (the C40 and C60 medium duty trucks retained the small window). The GMC grille was revised, with the letters “GMC” no longer embossed in the horizontal crossbar. Another addition was the Custom Comfort and Convenience interior package that fell between the Standard cab and CST cab options. In 1968, Chevrolet celebrated 50 years of manufacturing trucks, and to commemorate, they released a 50th Anniversary package featuring an exclusive white-gold-white paint scheme. Also in 1968, the 307 and 396 CID V8’s were added as well as the Longhorn model on 3/4 ton trucks. Featuring a 133-inch wheelbase, the Longhorn added an extra 6 inches to the bed. Longhorns, interestingly, were only 2wd; no factory Longhorn 4×4 was built. 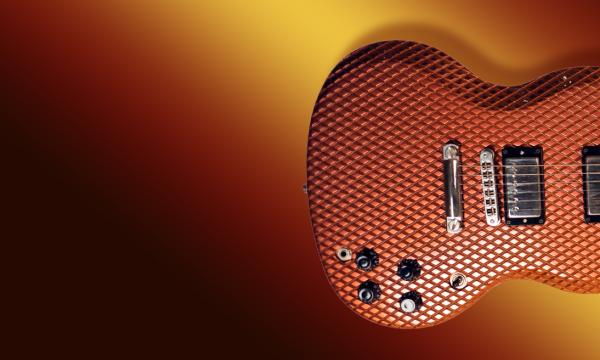 The Copperhead SG was the second Guitar that I did with the Gibson custom Shop. It was built to go with a 1967 Chevy c-10 pickup that I built using the very first, pre-production 572ci Chevy Crate engine. The guys at Gibson wanted to be a little more creative with this guitar so they carved the face of the body with a very cool, snake-like scale look.