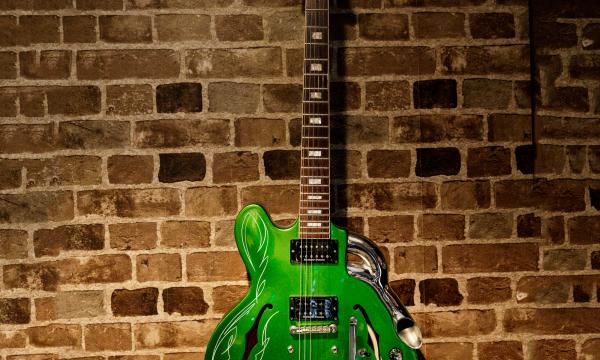 The Rat Roaster 335 was a guitar that was kicking around in my head for years. Since the Rat Roaster car is a Hot Rod 1932 ford Roadster with the vibe of 1969, I knew this guitar had to be special, and it had to have that Rockabilly, hot rod vibe… and that meant a cool exhaust system built into it. When I showed the drawing for the concept to the guys at the Gibson Custom Shop, they said “there’s no way we can build that thing”. Fortunately Gibson Custom shop honcho Rick Gembar said that if I wanted to build it, they would do the final assembly on it. Of course I told him “heck yeah” and he grabbed me a 335 that had a flaw in the finish and was slated to be destroyed, and said “go to it”. 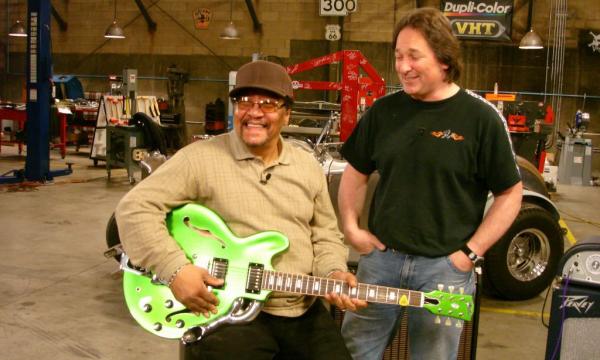 One of a Kind

So I basically cut off the lower body horn and designed and built a stainless steel header to take it’s place. The header is held in place by hidden nuts in the pickup cavity so the guitar has an ultra slick look to it. The guitar was shot by the guys at West Kentucky Collision center, using the same custom “Rat Roaster green” PPG paint that we used on the car. Of course the guitar was outfitted with a Bigsby tremolo for the ultimate vintage rock and roll vibe. This is my favorite Gibson so far because it is VERY unique, plays great, sounds great, and just screams rock and roll hot rod. At this point it is the only one in existence. Gibson said they would offer them to the public, but because of all the custom fabrication required, probably priced them so high that nobody ordered one. Too bad… it’s an awesome piece.